The courage of the Sisters of Charity 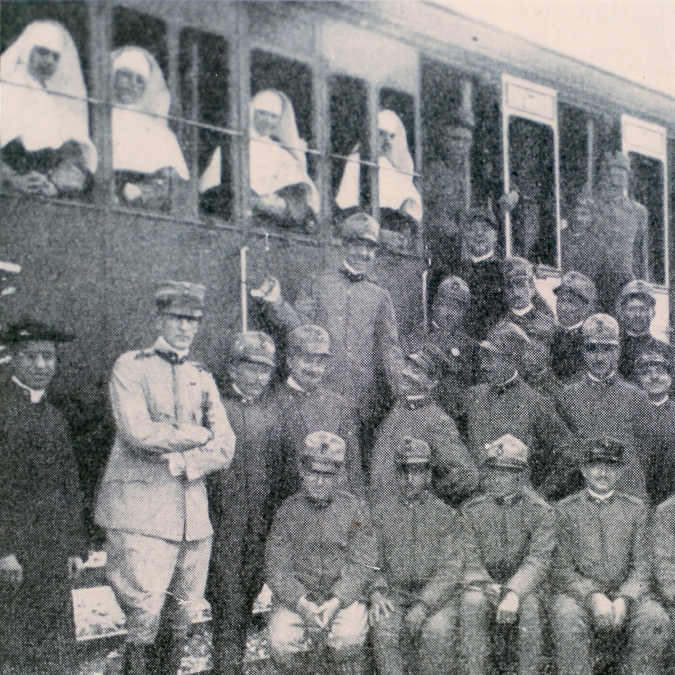 Courage  and strength of women

Under the High Patronage of the PRESIDENCY of the REPUBLIC, the ASSOCIATION of CULTURE and RESEARCH “ZANARDELLI” of Brescia has encouraged a “Study Day”  on the   “Courage and Strength of WOMEN” during the Big War 1915-1918 which will be officially held on the 24th April 2016 in Villa Mazzucchelli of Muzzano (Brescia).

Even the Sisters of Charity have been invited to describe across testimonials, articles and interviews, the work of the Sisters who have  faced dangers and adversities of every kind, giving the best of themselves to cure the wounded soldiers, in the field hospitals, on the ships and on the trains hospital.

At the beginning of the First World War the Superior General Mother recruited Sisters from all parts for the trains-Hospital of the Sovereign Order of Malta. In a circular letter dated 6th May 1915, she wrote:”My dear daughters, the days which we are living are dangerous: the wars, the earthquakes, the floods are hitting the earth which is already soaked with blood and tears … If my commitments did not hamper me, I would be very glad to race in your midst. This kind of service leads you to live continuously among the dead and the dying and make sure that your behaviour is worthy of your vocation…”

Telegram n. 442 – Rome- Minister of War – announced to the Superior General that “The Sisters crusades” would be leaving “from Milan- on Saturday 2nd September, at 70’clock.”

On the 23rd August, the kind Mother reached Milan near the four trains-hospital heading to the western front: “She wanted to see again and embrace her sixteen daughter, before departing on the on the iron and fire line of the battlefields and the trenches…” (that same night, the kind Mother passed away unexpectedly, perhaps thinking of the 68 sisters who died in the Hospitals field during the first War of Independence …?!)

One of these Sisters who remained for two whole years in her place was Sr. Vincenza Giussani who was honoured with the golden medal.

The other Sisters of Charity contributed in the suffering and difficult events across their work in the various Hospitals of Turin, Novara, Busto Arsizio, Savigliano (CN) Vercelli, Varese, Alexandria, which became Military Hospitals because of the circumstances.

Another three “golden medals” remind us of the untiring work and heroism on behalf of three of our Sisters: Sr. Lucia Borroni, Sr. Mari Rosa Gario and Sr. Agata Sozzi who offered their service for over forty years, in the Military Hospital of Alexandria, which during the first World War had become the central premises of all the therapeutic, pharmaceutical and provisioning organization of the 300 branches of the Hospitals.

But how many persons died? How many were wounded? The Sisters of Charity cured them, without ever counting them, till the end of the war!

It had been written regarding the sisters of charity: “They work during the day without being scared of the rumble of the cannons, they watch during the night and they attract everyone’s admiration due to their dignified and charitable behaviour….” On the 2nd September, the four trains-hospital left Milan, on which 16 Sisters were present.

She wrote to them: “If my engagements didn’t hinder me, I would be glad to rush in your midst … The world might appreciate your fervour and your charity but the persons living in the world will never succeed to understand the spiritual good that you can accomplish… Don’t be scared of the sacrifices that this Mission will demand of you, fulfil it as worthy spouses of a Crucified God, without heeding nature… This kind of service leads you to live continuously among the dead and the dying. See that your behaviour is worthy of your vocation!”

The other Sisters contributed in the suffering and difficult events across their work in the various Hospitals of Turin, Novara, Busto Arsizio, Savigliano (CN) Vercelli, Varese, Alexandria, which became Military Hospitals because of the circumstances. They did so till the end of the War.