The Study Day entitled “The Great War: the courage and strength of women” ended in the late afternoon of April 24. The eighteenth-century rooms of the splendid Villa Mazzucchelli in Ciliverghe di Mazzano (BS) welcomed over two hundred participants at the event that wanted to offer a female reinterpretation of the First World War showing how much women, secular or consecrated, were engaged in society, in field hospitals, in the rear. Some of them also interned in Katzenau and in refugee camps, where they had the opportunity to give themselves through a tireless apostolate.

The audience also had a nice group of young people who followed with interest. The speakers, including our sisters Sister Maria Domenica Fagnola and Sister Maria Grazia Traverso, (the latter also interviewed by local newspapers) extracted numerous and often humble, simple, unknown female figures from hiding, and therefore highlighted, but who have donated part of their lives and even defied death, to be present and help in the most varied ways both the fighters and the people directly or indirectly involved.

Current times often tend to seek new challenges on issues that are sometimes puzzling, in clear conflict with ethics. In the case of this conference, however, starting from the past, we looked at the present, at a very discriminating situation, since the school history manuals do not do justice to all the commitment made by women within society, obtaining a convergent vision between consecrated and secular world.

The Study Day responded, it seems to us, also to what Pope Francis says in his Apostolic Letter on the occasion of the Year of Consecrated Life, stating as: “It does not concern only consecrated persons, but the whole Church … all the Christian people … “. And again: “It is your life that must speak … I expect you to wake up the world … I also expect that the communion between the members of the different Institutes will grow …” And meeting and communion took place during the conference and in the preparatory phase of the same.

Surely we must reflect and try not to disperse this constructive moment. The happy female reinterpretation of the events of the Great War, the desire to give completeness to the historical picture also involving consecrated women and the highlighting of the scarce or even lack of recognition of the role of women in school manuals, is due to the competence and tenacity of prof. Emanuela Citati Zambelli, president of the “Zanardelli” Culture and Research Association of Brescia. Our THANKS therefore to the kind prof. Mentioned that even with this conference it gave us the opportunity to fulfill the wishes of the Holy Father: his desire for women to be more valued in their particular feminine being and the meeting and dialogue with secular realities that operate constructively within to society. 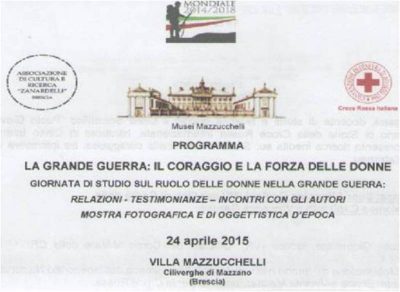