A feast that doesn’t exist on the calendar

“Mum who is that sister on the big canvas on the stage?” is a question which an 8 year old girl puts to her mother sitting next to me.

The mother, who didn’t want to disturb, answers in a low voice: “She is a sister born in this small village who became a saint because she loved Jesus, and today, after many years, everybody comes to celebrate her feast and to pray for graces”.

The girl didn’t understand so much but she was very attentive during the whole celebration as if she wanted to understand better and when I smiled to her she felt important.

In fact, the liturgical feast of Saint Agostina Pietrantoni, Sister of Charity of Saint Jeanne Antide and patron saint of nurses, is now celebrated on the second Sunday of September instead of on the 13th November, to avoid bad weather, storms, wind and hail as it used to happen. Thus the people of Pozzaglia can end their holidays since they fill the small village during the summer.

So today, many people reached the Sabina region, crossing a landscape rich in olive trees and oak trees further on. One must also go through small medieval villages before reaching Pozzaglia Sabina, native village of the Saint.

Sure we missed the reddish-yellowish autumn colours with which the month of November used to decorate the beautiful celebration in the village square where the devoted pilgrims gathered to pray. But the various green shades of the countryside made up for it due to the abundant rainfall during the last weeks.

Pozzaglia Sabina can be described as a charming and fantastic village and the presence of the simple and humble girl can be felt and inhaled through the clean air of the place. Having been brought up in a family where “everybody was attentive to do everything properly and where prayer was frequent”, she had learned how to fulfil her duty, the meaning of sacrifice and dedication, and the toughness of daily life didn’t fade away the joy which enlightened her beautiful face. Her joy was the result of her inner serenity and of her intimate relationship with God.

The homily of his Excellency the bishop of Tivoli, Mgr Mauro Parmeggiani who never fails to attend to this appointment, has touched the conscience of all the faithful present on the square. While commenting the Gospel (Mk 7,31-37) of this XXIII Sunday of ordinary time, where Jesus touches the sick man and “heals” him, the Bishop takes the opportunity to recall the simple mission of Agostina who doesn’t fear to touch the flesh of the poorest and of the sick. She does it not only to cure them but also to donate them God’s gift, without expecting any reward (James 2,1-5 second reading). Her attitude didn’t change with Romanelli “who answered to her loving care in the name of Christ, with blasphemy, a sort of persecution …   and Agostina continued to cure him … and notwithstanding everything, she was rewarded with murder” continues the Bishop. In fact he stabbed her seven times to death at the hospital of Santo Spirito in Sassia where she fulfilled her mission as Sister of Charity in a perfect and humble manner. So much so that the anticlerical and Masonic Rome of that time remained astonished and bewildered.

All the medical and health personnel, but in particular the nurses expressed their desire to have this gentle creature as their protector, as a beacon who enlightens their difficult profession, but especially as a model for them to imitate.

Agostina doesn’t measure her gift. As Mgr. Parmeggiani points out again, she doesn’t cure only those who can reward her, but she sees God’s face in the suffering face of the sick and cures them with all the tenderness of a daughter, of a mother and of a spouse, hence creating without great theological-pastoral discourses a mystic which is rooted in chapter 25 of St. Matthew: “whatever you did to the least of my brothers, you did it to me”.

Today, this concept of man and of the human person risks to be obscured by alternate and complex interests, by national and super-national plots, but for the Christians it always remains a point of discussion: “you did it to me”

A simple procession along the village roads, very often trodden by Agostina, the sound of the band to give a celebrative tune and then the blessing with the saint’s relic conclude the ceremony under a rather baking sun!

For the sisters of Charity hailing from many Italian districts to celebrate their sister, it’s a moment of fraternity and joy. Such an encounter strengthens their journey which is still difficult and arduous. They greet each other : “for Jesus, everything is little” and their eyes full of tears of joy give strength even to the many friends and faithful devout of Agostina who are punctual to this annual appointment in the Sabina land.

The small girl now looks satisfied and greets me. But this time she has understood properly her mother’s words.

The homily of his Excellency the bishop of Tivoli, Mgr Mauro Parmeggiani 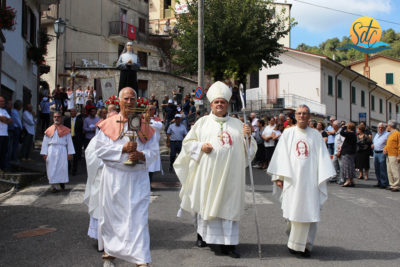 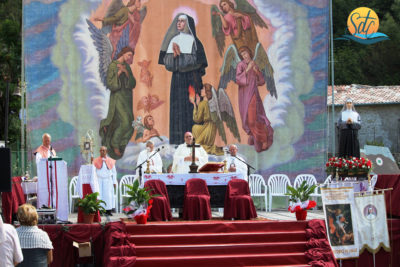 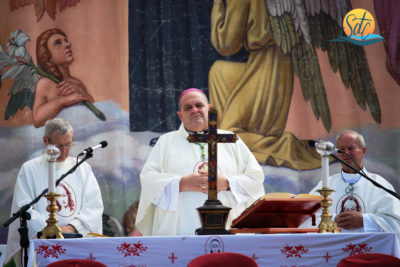 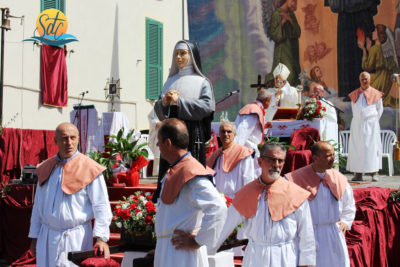 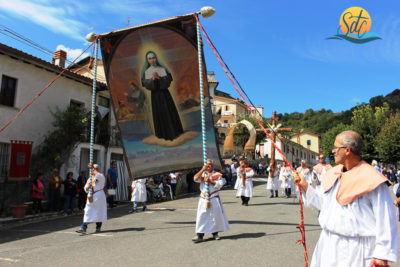 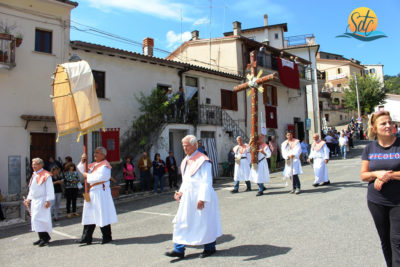 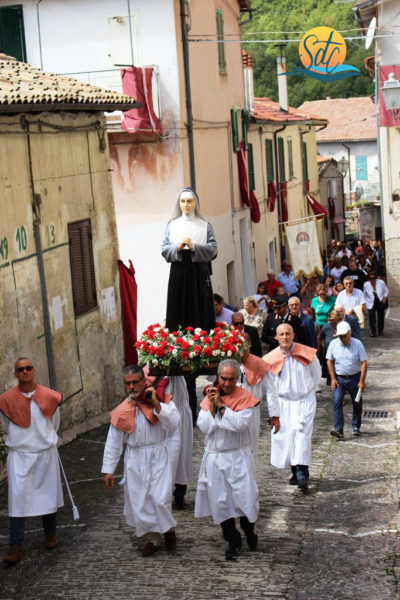 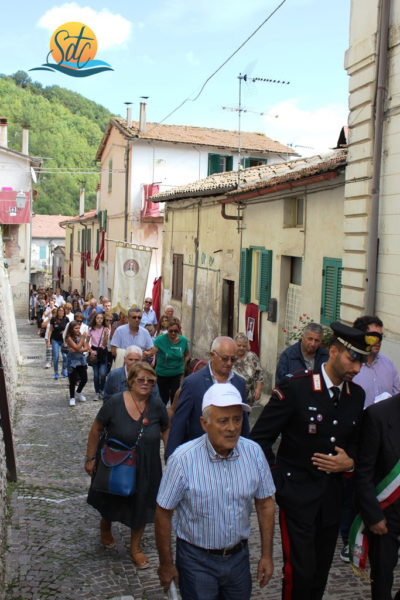