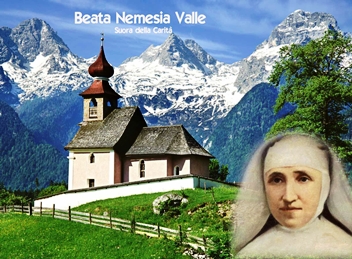 Giulia Valle born at Aosta on the 26 June 1847, bringing with her a great joy to the young and well-to-do couple of Donnas, who had already prematurely lost two sons. Anselm Valle and Maria Cristina Dalbard, her parents, took her to the baptismal font on the 26 June 1847, of the old collegiate of St. Orso and gave her the name of Maddalena, Teresa, Giulia. Her birth was followed by that of her brother Vincenzo. Her infancy was a serene one, between her mother’s work as a milliner and her father’s travels and commercial work. Animated with a profound religious sense, Maria Cristina Dalbard inspired the two children with the vision of a serene life and an authentic openness towards others as well as a generous character which oriented a particularly lively and an enlightening temperament and the natural curiosity of little Giulia.

During the year 1850, due to the necessity of work, Anselm  Valle is obliged to transfer himself to France, at Besançon and so he decides to take the whole family with him.  However, their stay in France is traumatically interrupted  with the mature death of his wife Maria Cristina, when Giulia is only five years old. Together with Vincenzo, she is entrusted to the paternal grandfather and to an unmarried aunt, in a very austere environment, where the two children experience all the sadness of being orphans.

When Giulia is 11 years old, she is once again sent to Besançon as a boarder, in a boarding school run by the Sisters of Charity, to continue her studies. Here, she learns French very well , becomes very clever in playing the piano, in embroidery and in drawing, things which enrich her culture and she also makes great use of the texts of the great masters of catholic spirituality, of Vincent de Paul and of Francis of Sales.

Having completed her studies, Giulia is no longer welcomed by her father at Donnas, but at Pont-Saint-Martin, because he had re-married. Difficulties and uneasiness intersected one another because of the difficult relationship with the second wife of Anselmo Valle. Giulia once again finds herself in an environment deprived of understanding, as she had already experienced in her childhood in her grandfather’s home ; in an environment becoming increasingly strange, above all after the voluntary departure of her brother Vincenzo, because of the continual disagreement with the stepmother. And inexplicably Giulia, will never know where her beloved brother had gone.

She faces this difficult moment of her life while seeking comfort outside the domestic walls, above all from her mother’s family, whom she constantly visits at Donnas: with them she can revisit her memory and her infancy days, her mother’s figure and the happy years passed in her company.

Perhaps, for this very same reason, it is easy for Giulia to rediscover in the Sisters of Charity, who had settled down at Pont-Saint-Martin, her teachers of Besançon who encourage and support her. Certainly, she observes with greater understanding and pleasing attraction their charitable style. Giulia becomes an assiduous and frequent visitor of the small community of sisters dedicated to teaching and to the education of children, and soon begins to help the sisters with the teaching of catechism, frame embroidery and the supervision of the little ones during recreation time.

When the time had come for Giulia, to think about her future, her studies at Besançon and her collaboration with the Sisters at Pont-Saint-Martin contributes to help mature in her an authentic preference for the teaching profession and capable to become for the youthful souls a point of reference to face the vicissitudes in life. But the figure of a teacher, for Giulia is indissolubly tied to the choice for a religious life, that unites itself to the total donation of self to God, with an educational commitment, charitable works and a life lived in common. 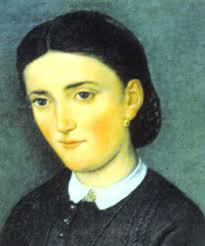 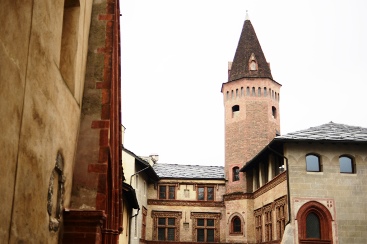 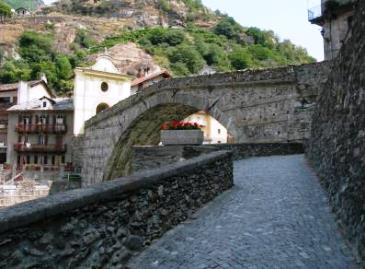 Her father Anselm is surprised at his daughter’s decision, to choose religious life, and tries to dissuade her, but ends up by giving his consent to his daughter’s choice, and on the 8th September 1866 he accompanies her to Vercelli, to the Monastery Santa Margherita, where the Sisters of Charity have a novitiate: for Giulia it is the birth to a new life, in peace and in joy even if in the midst of tears because of the new detachment.

At the end of the novitiate, Giulia receives the religious habit and with the habit as a sign of the beginning of a new life, a new name: Sister Nemesia. Nemesio is the name of a martyr of the first centuries of Christianity. She is happy with it. This name will be the program for her life: “To witness my love for Jesus, to the end, always, whatever the cost.”
Her mission begins at Tortona, in the province of Alessandria , in the Institute San Vincenzo, an Elementary and a Secondary School, a boarding school, and an orphanage. Sister Nemesia very soon becomes the point of reference for every initiative, apostolic and missionary formation. She is present with teaching, with the participation in person in the various initiatives, with an open heart and open arms, even there where the work is not so inviting, where suffering needs to be consoled, where discomfort prevents serene relationships, where fatigue, suffering, and poverty limit the quality of living, where there are new paths to follow for the scholastic and catechetical reform.
A unanimous voice spread in and outside the house: “Oh, Sister Nemesia’s heart! Pupils, families, orphans, the poor, seminarians, the neighbouring conscript soldiers approach her for a letter, to ask to darn their clothes, to help them overcome their home sickness, all of them are convinced that they have a particular place in her heart, even more so after having been named Superior, which she accepted only to be able to render a better service.

The commitments are many, she has also to keep the accounts of the Institute, always in red, but if someone needed to speak to her, she listened attentively, as if that was the only thing on her mind. Frictions with the sisters are not lacking, but she is surprising calm. She is all the time knitting, to provide clothes for the orphans, for the Seminarians for whom she had a soft spot and also for the soldiers stationed in the nearby military district. One generation after the other: all of them want to remain in touch with Sr Nemesia, they comeback to college to present their fiancé or to present their new-born child.

Even if the money is never enough, she is all there for the missions. When the spiritual Director for the Institute, Fr Giuseppe Carbone, became a Capuchin, he left for Eritrea. She supports him with many initiatives, collecting money to help him with his mission. This is how the first missionary circle started in the city. She helps as best she can also the young Fr Luigi Orione, founder of the Sons of the Divine Providence, and several times gives shelter to Blessed Teresa Grillo Michel, foundress of the Little Sisters of Divine Providence in Alessandria. With them she also establishes an intensive and fruitful collaboration, sharing religious ideals and charitable solicitude.

On the 10th  May 1903 Sr Nemesia has to leave Tortona: she is expected at Borgaro Torinese, a small country town, a few kilometres distant from Turin, where the generalate of the Sisters of Charity is starting a novitiate in the new province of Turin.  Here the novices are waiting for a novice mistress to accompany them along their new, long and austere journey, but impregnated with joy because they are giving themselves to God and to the poor, according to Saint Jeanne Antide Thouret’s spirit.

Sister Nemesia in Borgaro, together with her collaborators, with those who work in the interior of the house, on the park, in the orchard and above all with youth is an active presence. Her method of formation always aims at teaching kindness and understanding things that educate to renouncement in order to love, to a patience that can  wait and knows how to find the right and necessary path for each one in particular. Her novices tell us: “She knew each one of us individually, understood our needs, she treated each one of us according to our character  and she used to ask us whatever managed to make us love one another.” 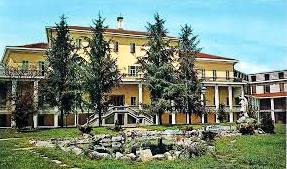 In the span of thirteen years, five hundred novices learned trust in God,    love towards prayer, dedication to serve the poor, the evangelical meaning of the community; they appreciate her witness of fortitude  in face of tribulation; they want to imitate a sanctity which is expressed and lived day by day: “Sanctity does not consist in doing many things or in doing great things but in doing whatever God asks us to do, and to do it with patience, love and above all in fidelity as is our duty, fruit of a great love.”  “Holy is the person who consumes herself in her place every day, for the Lord. Given love is the only thing that remains: see that you love intensively before you reach your life’s end.

But the Provincial Superior has a character that clearly shows she does not approve the feeling and behaviour of the first Novice Mistress.  She believes, that a more rigid method would better form the future religious to a more remarkable and trustworthy manner. This difference of opinion  generates relevant contrasts which cause scolding and humiliations even in public.  Sr Nemesia accepts everything in silence and in silence continues her mission of responsibility:  “From one station to the other let us continue   our path along the desert…and if the desert is deaf, He who created us is always listening….”

The years at Borgaro Torinese, are for Sr Nemesia an authentic season of trial, because of the difficulties and misunderstandings.  Although extremely balanced and serene in her interior life and in the way she formed the novices, she is tortured with a nameless anguish. It seems to her that she no longer understands and that she has gone astray: it’s so clear to the  Provincial Superior and she does not approve it;  the sisters of her community accuse her of weakness… The persisting difficulties and misunderstandings continue to  deteriorate her health, and in the autumn of 1916 her health suddenly broke down. Struck with a sudden attack of pneumonia she dies after six days in agony, on the 18th  December of that same year.

The prayer she recited from very early times: “Jesus strip me of myself, and dress me with Yourself” accompanied her throughout  her life. Now she can say: “I do not exist anymore for anyone”. The detachment of self is total. It is the extreme offering of an existence totally donated to Love.