The seventh Superior General of the Sisters of Charity

Mother  Ildegarde Zmiglio was . Her mandate lasted 15 years, from 1900 till 1915. Many sisters who had known her, recall the penetrating power of her look, her readiness to listen, the courage of the responsibility and of the gift of self which she demanded from the sisters.

The war events in Libya  in 1912 and those at the beginning of the great war, witness it properly.

“At the beginning of the 1st World War, the Superior General recruited sisters from all parts for the  hospital-trains of the Sovereign Order of Malta, and the General house remained only with the sick sisters or those who were not capable to work. Even the novices and the postulants were sent to assist the wounded and the orphans”. (Sr. Raffaella Perugini – “Nostra Stella” –  March 1958, p 30)

In a Circular Letter dated 6th May 1915, Mother Ildegarde wrote:

“My dear daughters, the days which we are living in this time, are dangerous … the war, the earthquakes and the floods are hitting the earth which is already soaked with blood and tears, the rumble of the cannons, the bullets and the machine guns are killing thousands of young soldiers! The poor wounded persons ask to see again and to bid farewell either to their mother, their spouse, their children for the last time, but they are denied to do so … the wild ambition and the desire of conquest, invade the heart of some Powerful of the world and they oppress every feeling of humanity …”

In this same circular, the General Mother, announces that the Sacred Congregation of the Bishops and Regulars, “considering the difficulty of the painful and dangerous times which we are going through”, has decided to postpone momentarily the assembly of the Provincial and General Chapters, to autumn of the following year 1916, in the hope that the political affairs will be reorganized and that peace and tranquillity will reign among the peoples. Thus they will be able to proceed calmly to the Elections … But I cannot hide away from you the painful impression I experienced due to this announcement, because of my age – the long  fatigue shouldered – the growing difficulties and the sad events encountered in leading the Institute, made me desire some calm and rest in these last days of earthly exile … But God wants that I still work for the Institute and will continue to work until the hour of rest will ring for me…!

In 1915 Mother Ildegarde wrote a letter to the sisters who were called to leave on the  hospital-trains to look after the wounded soldiers:

“.. It’s not just the duty, but the feeling of love which urges me to write a few lines, my good daughters, in this circumstance which is sad in itself, but rich in adventures for all those who among you will be destined by Obedience to be ready to assist the wounded during the war.… If my concerns didn’t prohibit it, I would be so happy to run in your midst, and find myself with you near the bed of those miserable persons to surround them with spiritual and temporal care which they need so badly… My dearest daughters, make the best of this grace which the Lord gives you in offering the occasion to accomplish much good which God alone knows about its importance…  Other sisters from Savoie will come to help you and share with you the difficulties which you will encounter. Give to these sisters the example of the life of sacrifice, of self-denial and of all the religious virtues… Behave in a way that everyone might admire your zeal for the spiritual good of the upset, the attitude and the religious seriousness with the persons with whom you will deal…”

On the 23rd August, Mother Ildegarde reached Milan, where the four hospital-trains destined to the western front, stopped. “She wanted to see again and bless her daughters before their departure on the iron and firing line of the battle fields and the trenches.  She saw them and greeted them one after the other. As she moved away from the trains, the sisters wept tenderly for the Mother who was henceforth tired. The soldiers present, were hardened in their military greeting due to the major officials. It was the last greeting of the daughters and it was the grateful praise of the Homeland….  The night of the same day, on the 2nd September 1915, the Superior General died after an utterly short malaise”. She was 76 years old, 56 of which were spent in religious life.

“ Her maternal fervour urged her to encounter her sixteen daughters in Milan, who, since the  beginning of the war of Italy, are in charge of the trains of the Knights of the Maltese Cross, to assist the poor soldiers who fell sick or remained wounded in the battle fields”. (from the Necrology.) 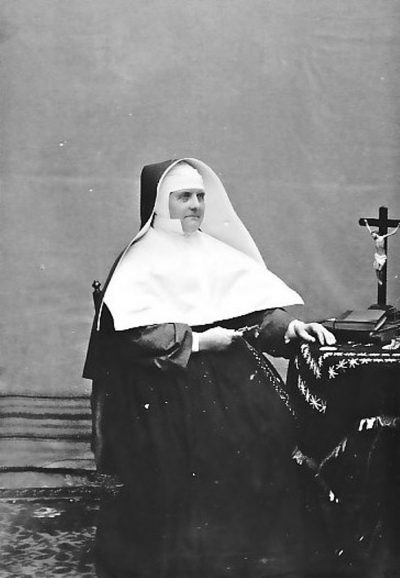 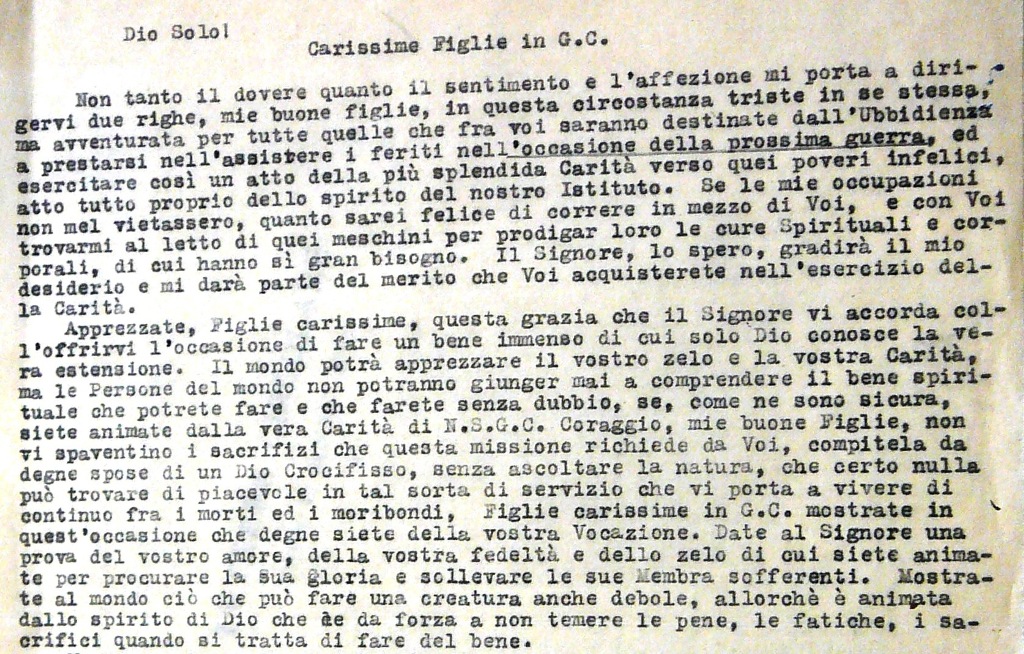 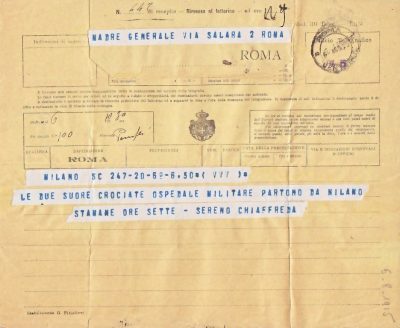 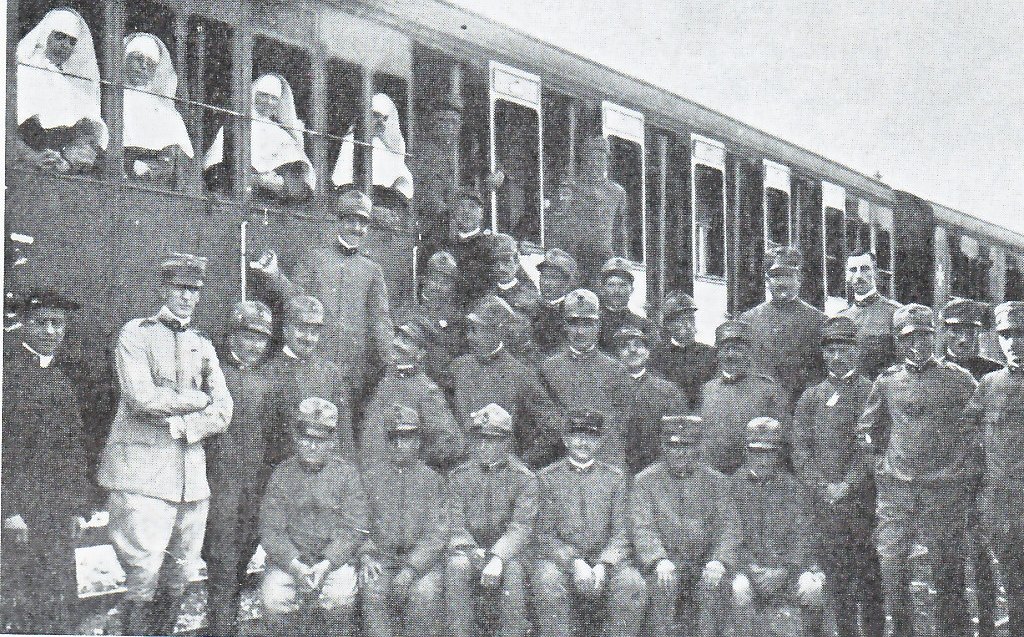 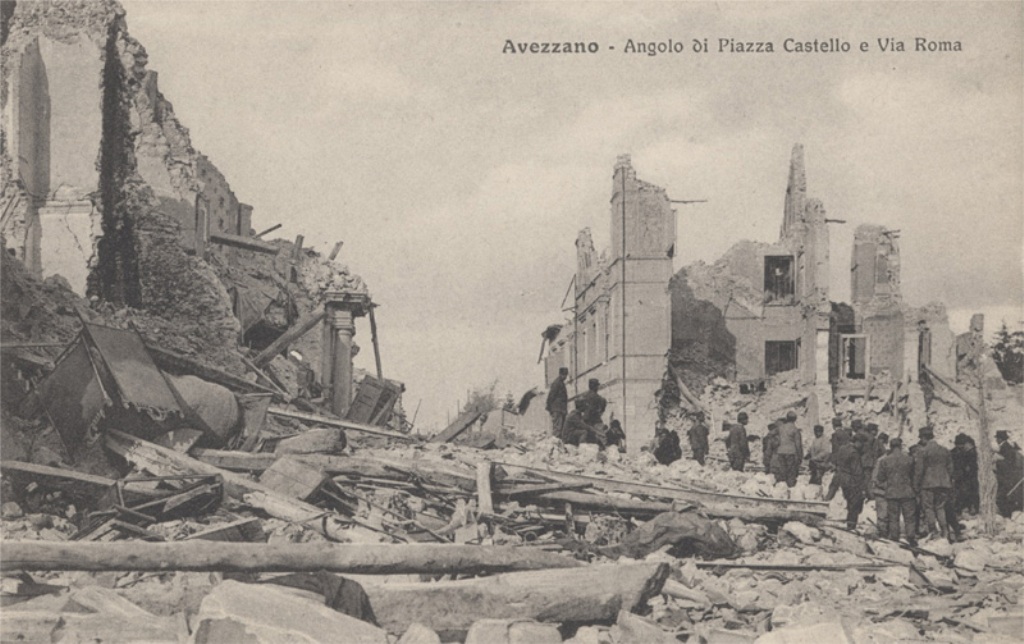 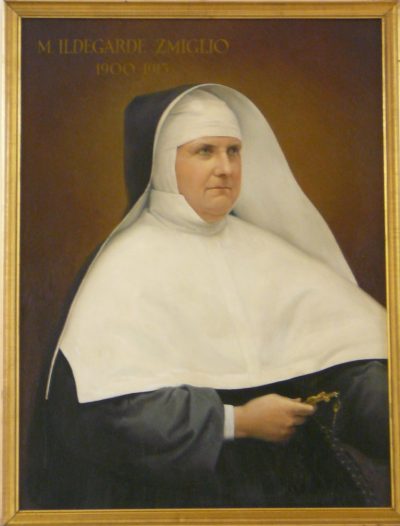