To trace Sister Nemesia’s spiritual profile is not that easy: her face expressed calm, peace, serenity, even when her heart was troubled. Her whole life was none other than the summing up of so many normal things, ordinary occupations, the usual housework, nothing that excited praise, everything so normal. A person would be greatly mistaken if he tried to seek extraordinary events, facts andmoments in this humble person from Valdaosta,  that show an exceptional religious behaviour. The spiritual witnessing of Sr Nemesia develops itself, on the contrary, in the ordinary life, and is discovered in the dimension of her daily life. Her life is a strong message of humility and of charity: her fidelity to the charism, to her commitment to the novices and to her sisters are to be intimately linked to her love for the Church, manifested in her ardent missionary spirit and in her generous and joyful availability to serve all in the Church.

Multiple factors influenced her spiritual itinerary:  the solid religious education she received in the family, her studies at the Institute of Besançon and the strong ties established with the Sisters of Charity of Pont Saint-Martin, the formation acquired at the novitiate in Vercelli; the meeting with the great masters of the spirit, from the texts of Ignatius of Loyola, Francis de Sales and Vincent de Paul.

Everything contributed to develop in Sister Nemesia a living sensus ecclesiae, an authentic  missionary passion and an educational behaviour whose characteristics were  really incisive and fully adequate to the concerns and  needs of her time. 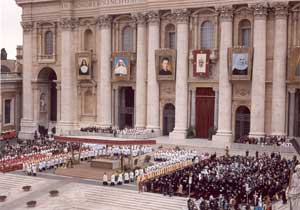 Rome : St. Peter Square,
the day of the beatification 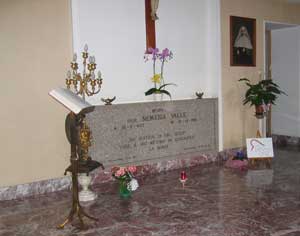 Logo of the beatification

IT IS THE PASCHAL MYSTERY THAT RENEWS US

Since Sister Nemesia’s life was extremely simple, only two places, Tortona and Borgaro and only two activities, that of teaching and a religious profession; even so, sister Nemesia draws her spiritual nourishment from a unique and fundamental theological theme: love for Jesus crucified. And it is in the imitation of the suffering Christ that her concept of educational and apostolic charitable commitment takes root.

The evangelical announcement, the human and Christian education of the new generations, serving the poor, the missionary concern, religious formation of the novices is configured to the imitation and the following of Jesus Christ as a commitment to continue His work of Redemption among mankind, as a participation in the Mystery of the Christ Saviour and Redeemer: “Desirous that God may be known, loved and served in all creatures and highly inflamed with the ardour for the salvation of souls – remembers one of her pupils, who later became a Sister of Charity, – she instilled in us, prayer, so that the Catholic faith will be widely diffused, and God will receive the greatest glory”.

IT IS OUR UNION WITH GOD THAT TRANSFORMS US

While she tried to cope with her commitments and the daily worries resulting from her service with the boarders, the orphans and the novices, while she was absorbed with the duties of responsibility tied to the role of teacher, while she committed herself in search of every method to help the missioners, while she took advantage of every opportunity to help the poor, the sick, the prisoners, Sister Nemesia constantly lived an intensive interior participation in God’s mystery, sustained with a warm, spontaneous, tender and benevolent piety.

Her specific spiritual mark was clearly evident especially during the moments of recollection and prayer, when understanding the signs of God’s revelation  in every moment of her life and in the constant harbouring of a benevolent and loving temperament, gifted with a common ability of penetrating into the hearts.

The strong desire to live interiorly in the light and confrontation with the presence of God is expressed during the moments of recollection and prayer and becomes a motive and a support for an attitude towards others and the vicissitudes of life characterized with an exceptional meekness, joy, and happiness. The constant care dedicated to the discernment of most of the  relational modalities, adequate to the transparent and to the character of the persons with whom she came in contact and her untiring patience of which she gave ample proof, were united to a strong will power, that allowed Sister Nemesia to maintain in various circumstances, a constant equilibrium and an interior serene harmony.

She welcomed the vicissitudes of life and all the suffering, for most of which she was unjustly blamed, with an attitude of submissiveness and agreement and with an attitude which allowed her to smile in face of adversity to avoid any external manifestation of  her heart’s affliction and   anguish.

In Sister Nemesia’s spiritual life, love for her neighbour configured itself as the highest manifestation of her trust and abandonment to God, in the hands of whom she placed her own will and entrusted her heart, confident that every suffering was an effective instrument of purification and a spiritual elevation.  In the afflicted person, in the sick person, in the poor, in the orphan, she contemplated the face of the suffering Christ, who through the sacrifice of the Cross, had restored a possibility of salvation to the whole of humanity. 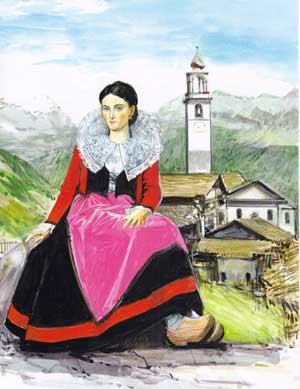 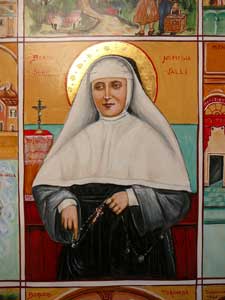 Icon of the blessed Nemesia Valle

During the years she was a teacher at the Institute of San Vincenzo of Tortona and above all during the time when she was a novice mistress at Borgaro Torinese, Sister Nemesia exercised an intensive activity as guide and spiritual director, through personal talks with youth in formation, the numerous written interventions addressed to the pupils and novices, to the considerable  correspondence with her ex-pupils, who continued to ask for her advice and help, even after having left the boarding school or having finished the novitiate.

Above all the number of letters allow us to learn the basic directions that indicate the intensive word of spiritual direction undertaken by Sr Nemesia. All this helps us to  discover  that the spirit of profound generosity and comprehension, her broad-mindedness, her counselling always particularly persuasive and incisive.

Her temperament distinguished itself for its love and patient availability and understanding with regards to any kind of circumstances, from the most benevolent to those greatly weighed with hostility, contributed to present her with a personality particularly gifted in the analysis and the orientation of the conscience.

It seems that I might as well  say that Sister Nemesia’s ability to listen and to give meaningful answers to the multiple existential problems and to the complex spiritual research of youth received at the Novitiate, represent not just an innate ability or a natural predisposition for interpersonal relationship, but the result of a demanding spirituality of one’s own gifts of intuition and of the psychological  penetration for the constant and vivid  concern about the happy result of the human and religious itinerary of the youth entrusted to her care.

AN EXPERT IN HUMANITY

Her witnessing to humanity was marked with different shades of gentleness, sensibility, sweetness, respect and delicacy.  Especially, her educational style was also centred on example, gentleness and on an affectionate dialogue; her method chose simplicity, equilibrium, an interior solidarity and aimed at preparing a mature human and religious personality.

In order to realize this aim, Sister Nemesia noted all the limits of the traditional religious formation, centred mostly on   essential catechetical instruction and on the practice of devotions. Consequently, she was engaged  to help mature in the youthful conscience, an authentic openness to faith and a vigorous spirit of charity and Christian apostleship.  Also with this aim in view, Sister Nemesia  didn’t fail to exhort her ex-pupils to preserve spontaneity and to cultivate the enthusiasm and  light-heartedness characteristic to their youth, so that the monotony of the daily occupations and the deep responsibility of their adult life will not render  their witnessing of faith and the charitable eagerness barren, in relation to their neighbour.