The Thourets had already three sons when Jeanne Antide is born the 27th November 1765 at Sancey, a village in Franche-Comté. She is baptized the same day, and receives the name of her God-mother. 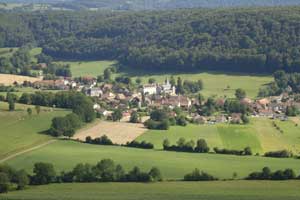 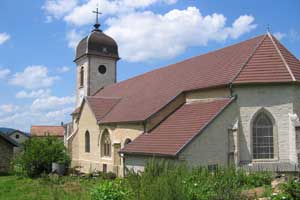 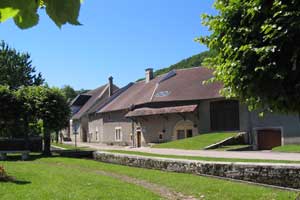 The house from where Jeanne-Antide left for Paris

1781 Mother of her family when she is sixteen

Her mother dies when she is sixteen years old and she becomes mother of her numerous family, dealing with an auntie who does not agree with the father’s decision of entrusting this responsibility to his daughter. In the relative calm at the end of the Ancient Régime, when the surging ideas of the revolution were creeping already in the countryside. Jeanne Antide knows the hard work of the village people with the charge of a family. She succeeds in everything she does. But against, the wish of the family who wanted a suitable man for her, she chooses to leave everything, with a departure she thinks it will be forever, to follow a mysterious call to serve Christ and the poor.

1787 marks the first beginning. She is 22 and a new life begins for her. She is not anymore the respected mistress of the house, but a humble little sister receiving everything from the community and those who are in charge. At Langres as in Paris, with the Daughters of Charity she learns to serve the sick poor as a spouse of Christ.

The itinerary for the formation of the young religious seems to unfold without unexpected events. This is true if we do not consider the illness, the grief for her father’s death, the revolution and its confusion, the disorder inside the convents, the religious persecution. Nonetheless, nothing makes Jeanne Antide stray from her project, not even, in 1793, the forced return to her village. 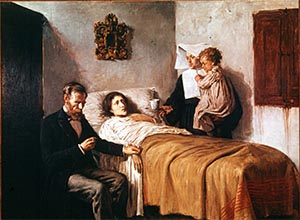 A service carried out by the Daughters of Charity 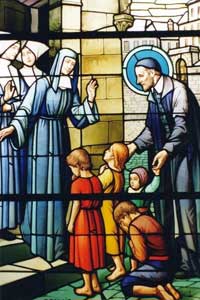 Saint Vincent de Paul
and the Daughters of Charity (Blamont) 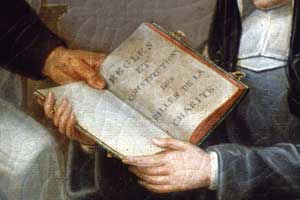 The Rule of the Daughters of Charity 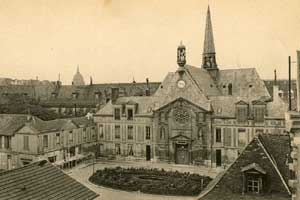 1793 Educator and nurse in the parish of Sancey

Since her return to Sancey, Jeanne Antide is urged to help the children for whom there was no school, the sick who lacked doctors, the Christians without priests and the priests who were hidden.

After all, she makes a gift of her talents and competence. Loved by everybody, she has everything to succeed. However she still dreams of solitude, poverty, prayer! The project of living a religious life still dwells in her and makes her join the ideal of life presented by Father Receveur.

Therefore she leaves Switzerland following the Solitaries who will be soon persecuted, hunted, transformed from migrants in fugitives traveling towards Germany. 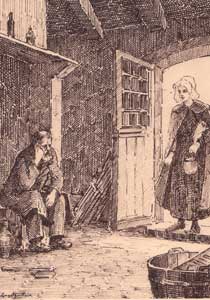 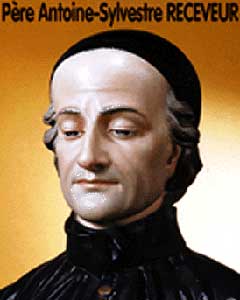 In this aimless flight with the Solitaries, among the many dangers of the journey, threatened by the Imperial army as well as the Austrian army, among poverties, epidemics, and daily problems inside the community, Jeanne Antide loses neither her head nor her love for God and for the poor sick entrusted to her and for whom she gives herself completely; at Neutschtadt, in Baviera, she sees her younger sister and many others die. She does everything with competence and wisdom yet … she cannot bear anymore not being able to express her love for the sick as she wishes: God is calling her once again somewhere else, but where? …

A new interruption!
In 1797, she leaves Wiesent near Ratisbona where the Solitaries are established, alone, with no money, without papers, not knowing German, without a steering compass beside her abandonment and her trust in God. She reaches Einsiedeln, in Switzerland, and then closer to France, which she had promised to God not to see anymore. It is here that she receives from the Church the beautiful and difficult mission of going back to Besançon to contribute in re-establishing the Diocese at human and christian level, after the disasters of the Revolution. 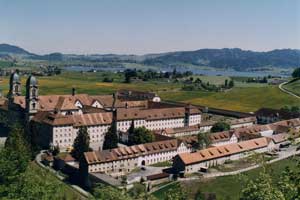 The abbey of Einsiedeln 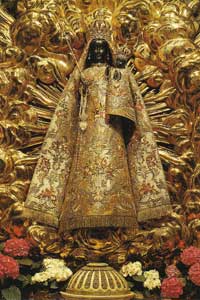 The black Virgin of Einsiedeln

1798 Prisoner waiting for the hour of God

At Landeron, busy educating children and taking care of a sick priest, Jeanne Antide had found again a calmer life. But she has to pack again and go where she did not choose.
How to prepare herself for the uncertain and dangerous future that she could foresee?
She does not have to search long. The Terror wakes up again. Having been in exile, Jeanne Antide must hide for almost a year at La Grange, a silent and prayerful prisoner in a tiny room offered by a friend at the risk of life. 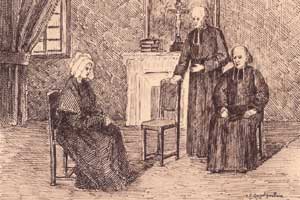 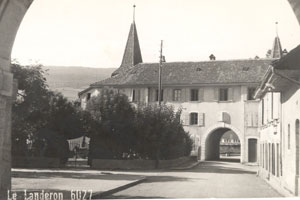 Landeron: house of the school

Finally she is in Besançon, with no other certainty than the mission entrusted to her and her abandonment to Providence! When she opens the first school the 11th April 1799, the calm has not yet been re-established, Foundress under obedience of a Congregation that claims to belong to Saint Vincent de Paul from whom she draws the first elements of her Rule of Life.

In ten years time, Jeanne Antide works, struggles, forms young sisters, takes care of the sick, establishes services, cooperates with the local authorities in taking charge of the poor and supports the Church. Recognized at a civil level by the Prefects, then by Napoleon himself, her foundation acquires a fame that expands to the neighbour Countries, in Savoy, in Switzerland, and in Naples, the great city rich of its poverties, of its history, still wounded by the passage of the French army. 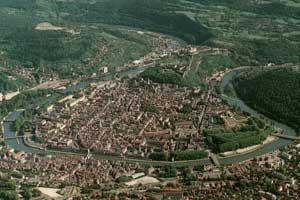 The city of Besançon 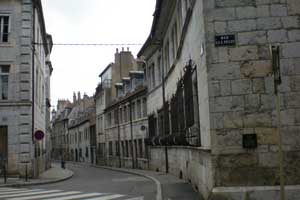 The rue des Martelots, place of the first community 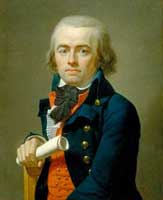 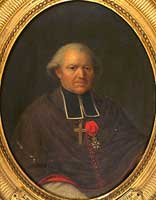 The Rule of Life approved by Mgr Lecoz 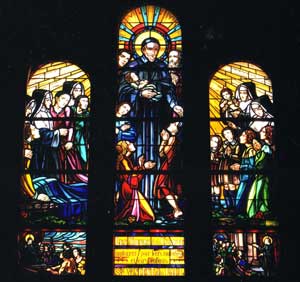 The sisters’ service in the spirit of Saint Vincent de Paul

1810 A woman with a universal love

Jeanne Antide accepts the Neapolitan adventure suggested by Madam Letitia, mother of Napoleon, with trust; she and her sisters prepare themselves as best as possible.
A European citizen, in Naples, Jeanne Antide sows goodness, care, education, wonder for this new way of living among the world. But she is always at the mercy of adversities, poverty, jalousy … and her restlessness about the communities left in France, where a wind of division is blowing, grows.
The beautiful trunk of the tree rooted in Besançon does not recognize her anymore. She is tried by the division, at the same time, in 1819, the Church recognizes and approves her Rule of Life, one of the first presenting an apostolic feminine religious life. 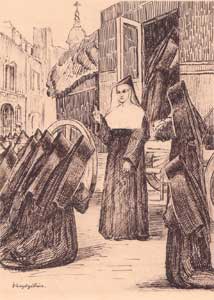 Jeanne-Antide, on leaving to Naples 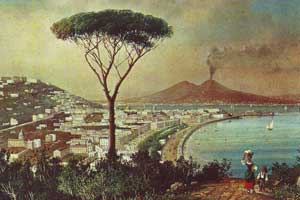 The city of Naples 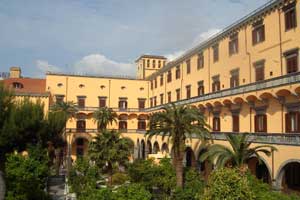 The monastery of Regina Coeli: the sisters’ house 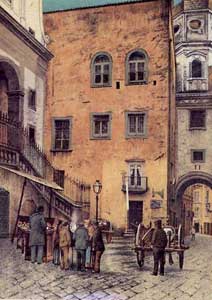 The square in front of the church of Regina Coeli 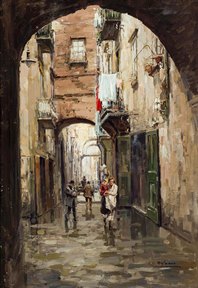 An alley of ancient Naples 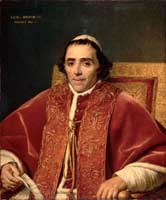 1823 Daughter of the Church

Will a trip to Paris to meet the authorities who refuse her, obtain a reconciliation among the two parties? It’s a failure!
Jeanne Antide keeps standing in the heart of the storm, with the constant pain of not having been able to rebuild the bonds with the communities in Franche-Comté opening them to the universal Church.

1825 A Christian at the foot of the Cross

Passing through Savoy, at Saint-Paul en Chablais, Jeanne Antide re-takes the way to Naples. At each moment her prayer, nourished by a suffering lived with the Lord on the cross, overcomes the horizon of space and time and allows her to keep loving till death the rebel communities and to maintain the hope in spite of the definitive separation. 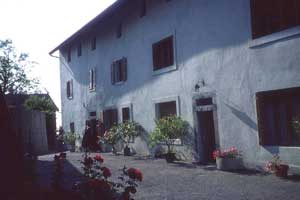 Saint Paul en Chablais: the home of the first novitiate in Savoy 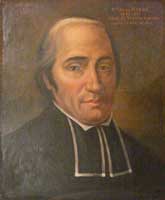 The parish priest of Thonon, the abbey Neyre 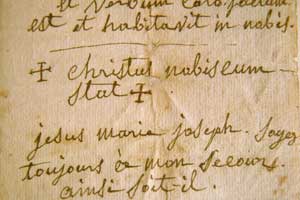 1826 Saint for the Church and the poor

Entrusting everything to the One who called her, filled with his love which supported her in many trials, Jeanne Antide, sick, dies in Naples, the 24th August 1826, for the grief of the whole Neapolitan people.

Woman of transition, to whom everything seemed to succeed, Jeanne Antide won great struggles through her sufferings and the grace received, through her love for God and for the poor, love for the Church and her Congregation. The Church proclaimed her holiness the 14th January 1934. 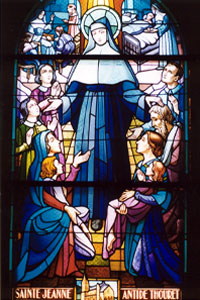 Stained glass of the church of Malbuisson (France) 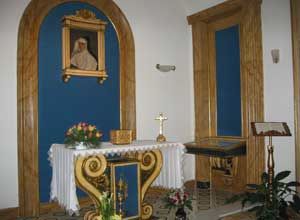 The room of Jeanne-Antide, in Naples, became a place of worship 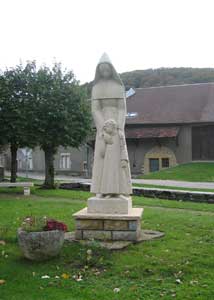 The statue erected in Sancey, on the occasion
of the canonisation of Jeanne-Antide