GOD ALONE – THE CHURCH – THE POOR

Jeanne-Antide was a woman with a strong character. Since her youth she was accustomed to take up responsibility first at home and then in the choices of her life. As a novice and young sister, she never wavered from the fundamental orientation of her life and was never accommodating in her religious life. In the dramatic choices of the Revolution she had a strong sense of the Church: she faced openly the representatives of the Revolution in her hometown. While being in exile with the Solitaires of Fr Receveur, she knew how to detach herself and to face a tough journey in a foreign country, supported only by her faith and her determination.

Since the origin of her community she had to make difficult choices, from which she never intended to run away. Throughout her life she showed intelligence, broad vision, a strong sensitivity, but also a mature maternal sense. In other words, she was an upright and resolute woman. On this human foundation a sense of humility, surely not innate, was grafted. Her humility was the result of a constant asceticism and a fine sense of contemplation and solitude, which found the appropriate expression only in the service of the poor.

The poles of her spirituality

The first pole is «God Alone», which implies a deep interior detachment from things, and a continued reference to God and his glory. Because of this basic foundation she commits her life in total consecration to the Lord: “when God calls and is listened to, He gives all that is necessary” (letter of February 23, 1813). In one of her letters of 1826 she concludes by saying that she “would have crossed the seas, would go at the end of the world, if she believed that God wanted it for his glory”.

In second place there is the Church. Mother Thouret repeated: “I’m a daughter of the Church, you be also with me”, as she wrote in the circular of April 11, 1820; for her attachment to the Church she deserved to be called Filia Petri. The authority of the Pope was strongly opposed by the limited and myopic horizons of gallicanism and by the short-sighted Diocesan particularity.

The third pole of her spirituality is constituted by the poor: she was a true daughter of St Vincent, whom she considered as initiator, founder, father, patron Saint, model and protector of the Institute. Besides the many concepts which reflect St Vincent’s thoughts, she also acquired the same tenderness for the poor, recommending respect, compassion, generosity, patience, charity.

There were many difficulties within the Institute especially in relation with Abbé Bacoffe, who claimed the role of superior. In the mentality of the time it was unacceptable for a female community to be led by a woman. Among other things, Abbé Bacoffe forbade her from having contacts with Archbishop Claude Lecoz (1802-1815), who despite the fact of being a constitutional Bishop, was the rightful pastor of the Church of Besançon and therefore the direct superior of the Sisters of Mother Thouret.

In 1810 the sisters were called to the Kingdom of Naples by Madame Letizia, the mother of the emperor. During her stay in Italy sister Thouret asked for the Pontifical approval of the Constitutions, which she herself had composed and had been approved by the Archbishop of Besancon. The minor changes demanded by the Pontifical approval provoked in the new Archbishop Gabriel Courtois de Pressigny (1817-1823), a rather wayward bishop with feelings of gallicanism, a complete refusal. Indeed, he forbade the sisters of his diocese to receive the foundress who had visited France to prevent the division of the Institute. The split was, however, inevitable. Mother Thouret returned to Naples where she lived painfully the last three years of her life. She died on August 24, 1826. She was beatified on May 23, 1926 and canonized on January 14, 1934. The two branches of the Institute were united in 1954.

Putting her own steps on the footsteps of St. Vincent led the saint to Christ. From here a series that has come down to us was born. 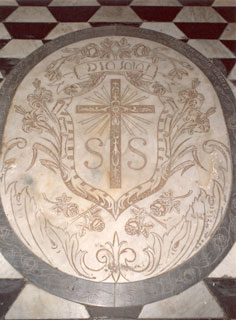 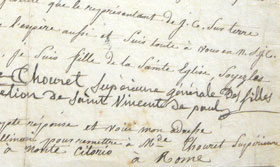 I am Daughter of the Church 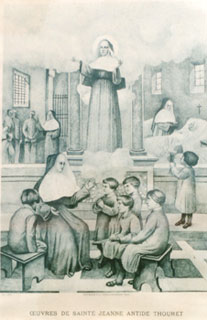 Which spiritual portrait of St Jeanne Antide is most significant for your life as a young sister of Charity?

“The search for the will of God” is the aspect of the personality of Jeanne-Antide that speaks to me mostly nowadays.

Jeanne Antide expressed this search for the will of God through her love for Him and for her neighbour. Like Jeanne Antide, the Sisters of Charity witness this same love for Christ, all over the world, through their way of living and through their services. Serving the poor in all their activities they search the will of God like Jesus, who gave the example himself washing the feet of his disciples.”

“I was attracted by the courage of St. Jeanne Antide to face any situation, to speak and to stand before any person with the dignity of a woman for the love of God Alone.

Today in life we need courage to face this world and also to manage our own situation of weakness or physical health acceptance and to go ahead in life. I understood that she got this courage from God Alone: “when you renounce at everything for God Alone, He will take care of you”. Especially in the experience of rejection by someone, even by the friends or person that I trusted… I use to think that I don’t have anyone, but it is in this occasion that is coming in my heart the answer “I am for God Alone and not for the human being.” In those moments in which I was called to be detached from everything and to live for Him Alone, I was in a great trouble and I understood that “to live for God Alone is so difficult, but in this I found a greater joy than any other thing”. So I could understand a little more the meaning of “God Alone is my all”.

“Trust is one of the most evident aspects characterizing the life of Jeanne Antide. The trust which accompanied each moment of her life surely comes from her strong and solid faith in the omnipotence of God. What strikes me is that she was able to hope against hope, in contradictions she met which are the same we face often today. Not losing hope in all difficulties and uncertainties, is rooted in a faith that is the light that enlightens.”

“Meditating the life of our Holy Foundress, the word coming from her heart: “God Alone” struck me a lot, because I feel that the centre of her life is “God Alone”

Since the beginning of my religious life I felt a great thirst to search for God. Now that I am a member of the Congregation and I know better Jeanne Antide, the conviction of her faith and her motto “God Alone” make me grow in my strength and in my joy in following Christ in a life consecrated to the Lord.

When facing situations of sadness, discouragement, deception, this word of Jeanne Antide gives me the courage to go forward. I dare to say that in religious life if God is not chosen above all, then this life does not have any meaning. “Lord give meaning to my life and give courage to reach the goal you offer to me”.