Welcoming the sisters of the Christian Retreat into our Congregation

27 November 2022, marks an important date and event for the life of  the Congregation and  of the Church : it’s the official celebration of the fusion of the sisters of the Christian Retreat with our Congregation. The Congregation for the Institutes of Consecrated Life and of the Societies of Apostolic Life acknowledged this fusion through the decree dated 8th September 2022 at the Vatican.

The Mass, which was celebrated by Father Eric Poinsot, vicar general of the diocese of Besançon, representing Mgr Jean Luc Bouilleret, accompanied by 2 priests, assembled in the chapel of the Sisters aux Fontenelles, a numerous assembly of around 300 people :  12 sisters of the Christian Retreat (two of them from Ireland), Sr. Maria Rosa Muscarella, superior general of the sisters of Charity and Sr. Maria Luisa Caruso, general councillor, Sr. Noëlle Portal, provincial superior and her council. Some sisters of Charity from France, Switzerland, England, representatives from various congregations from the diocese, and numerous parishioners of Fontanelles, Russey, families and friends were present…

When Jeanne-Antide Thouret was born on 27 November 1765, Antoine-Sylvestre Receveur, founder of the sisters and brother of the Christian retreat, was a 15 year old boy… He too belonged to this  Franche-Comté land.

Antoine and Jeanne-Antide had the occasion to meet each other during their life, perhaps at Fontenelles, not far from Sancey, the foundation place of the Christian retreat in 1789, but especially on the paths of exile and in particular at  le Vègre. Then their paths were separated, but both of them continued to love the Gospel and the mission till the end.

At the beginning of the celebration, Sr. Rose Marie PRONGUE, now the ex-superior general of the Congregation of the Christian retreat,  after having recalled the entire journey lived with her sisters before and after the official request for the fusion addressed to Sr. Nunzia DE GORI in October 2019, followed by various meetings with the Congregation of the Sisters of Charity, continued: « Thank you for the very fraternal and cordial welcome you have given me…special thanks go to Sr. Nunzia and to her General council, to Sr. Noëlle and to her Provincial council and to you Sr. Maria Rosa and your Council … you have shown a sincere interest filled with gentleness towards the fragile and ageing situation of our small international congregation.

… it is because of our past, our tradition in the service of Christ, our service with young people and with those in search of meaning, that we have chosen to become Sisters of charity, to live with you our consecration to God and to share the same mission in the Church and in the world.
Let us give thanks to the Lord of history who, through his Providence, guides our steps in the service of the poor, in the footsteps of our founders and their enthusiasm . »

And Sr. Maria Rosa Muscarella continued : « I am glad to be here with you to live this momen, when the Sisters of the Christian Retreat and the Sisters of Charity of  St. Jeanne-Antide Thouret become one family… in the service of the poor and the Church… We know how important was the time spent with the Solitaries for St. Jeanne-Antide and her sister Jeanne-Barbe. As a Solitary, Jeanne-Antide enriched her spirituality… the experience she lived  is now part of the charismatic heritage of our Congregation. Your coming among us is a grace that the Lord offers us.

With the spiritual richness of our Congregations, let us ask  Jeanne-Antide and the Venerable Father Antoine Sylvester Receveur to help us walk together with confidence in order to continue to nourish and propagate the fire of charity that Christ has kindled on earth ».

After the homily, all the sisters present, renewed together their vows and then the sisters of the Christian Retreat received the Cross and the Rule of Life of the Sisters of Charity.

The Offertory procession  advanced with the bread and wine along with two photos of Father Receveur and  Jeanne-Antide which they placed at the foot of the altar : « God alone is enough » and « Lord, your love for me is enough »

A very large choir helped the Assembly to pray and give thanks, and the numerous applause expressed the shared fraternity and the fervour of the prayer, which was also marked by many emotions.

After the Eucharistic Celebration, the numerous Assembly met for a drink which permitted many encounters, while the meal brought together 220 people who appreciated this moment of conviviality.

And on the same day, in BENIN, a celebration marked the merging of 3 sisters of the Retreat with the sisters of Charity of the Province of Africa in the presence of Sr Maria Paola NELOUMTA, Superior of this Province.

On Monday 28 November, at Saint Ferjeux in BESANCON, a celebration also marked the entry into the Congregation of 4 sisters of the Retreat who arrived some time ago at the EHPAD in the presence of Sr. Maria Rosa and Sr Maria Luisa.

And as the liturgy of this first Sunday of Advent invited us to do through the of the Vicar general :   « In the struggle of this life, may the Lord render your faith firm, your hope joyful and your charity effective ». 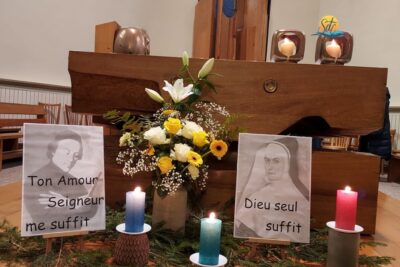 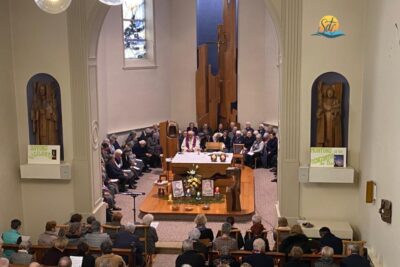 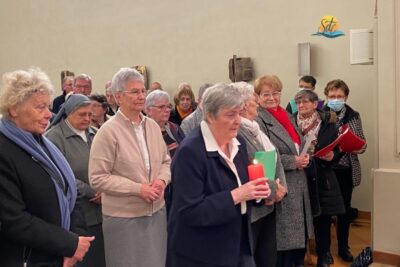 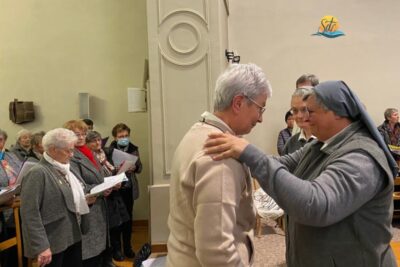 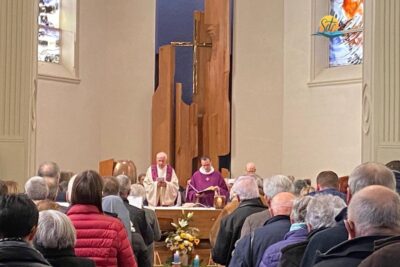