The service of the Sisters of Charity of Piedmont

The Sisters of Charity of Piedmont cured the wounded soldiers in the military camps,
on the hospital trains and in the Military Hospitals of various localities

Many Sisters were employed both in the various Military and  Civil Hospitals which opened their doors to the wounded: also in Turin,  Sondrio,   Bolzano,   Alexandria,   Savigliano (CN),  Novara,   Busto Arsizio (VA),   Vercelli,  Vigevano (PV) and in Pavia where the Boarding School of   Snia Viscosa was transformed in a Military Hospital in Reserve …

“Providence permitted that the Sisters of Charity offered their service, hence giving evidence of  an intelligent and organised activity during the difficult period of the 1915/18 war, when the Mauritian Order in Turin and in his other Hospitals, welcomed generously the wounded soldiers. There excelled the noble and the central figure of  the tireless Sr. Virginia Bolla,  who among the fifty religious was engaged in the charitable work  of the Mauritian Hospital in Turin …”.

At the end of the war in 1920, Sr. Virginia who was only 30 years old, was honoured with the Silver medal for her untiring work in favour of the wounded.

In 1915, Sr. Maria Rosa Gario received also the highest honour on behalf of the War Minister  for her long service of over fifty years accomplished in the Military Hospitals of the  Kingdom. She was donated the Golden medal especially for her consideration and kindness with which she assisted the wounded soldiers in the Military Hospital of Alexandria in the first place, and later in Savigliano.

“Who knows how many hours day and night, she spent near the bed of the young wounded soldiers! And with what great tenderness she knew how to accompany them to the operating theatre, as she imprinted a kiss on their forehead, telling them!:“This kiss arrives from your faraway mother” …”.

Sr. Agata Sozzi who served for over forty years in the Military Hospital of Alexandria excelled, together with her Sisters, for her unique organizational   skills, when in  1915, the Hospital became the central head office of all the therapeutic, pharmaceutical and provisioning organization of the 300 Hospital  branches capable to host about 10.000 convalescences.

In the most dramatic moments, the Sisters moved among the wounded day and night, sustained by the power of God Alone and animated by that charity which they thoroughly learned from their Foundress.

In 1915 even the  Military – Thermal Holiday Resort – of  Acqui (AL) was used as a Convalescent House for those wounded during the war. Since it had to remain open even during the winter, the permanent presence of three Sisters was necessary: among them was the young Sister Lucia Borroni who will donate a big part of her generous apostolic life to this Military Establishment and will risk deportation to a concentration camp in Germany on behalf of the Germans at the end of the Second World War, because she was accused of having hidden some Italian soldiers …

“Among the many wounded persons in the war of 1915/1918, I was there too –relates Mgr Amilcare Boccio – Founder of the Congregation of the “Little Daughters of the Sacred Heart” di Sale (AL) – and I remember with deep feeling the caring and the attention reserved for me by the kind Sisters of Charity of Busto Arsizio (VA) … I was a young Chaplain of the Alpines: their attentiveness healed both my soul and my body …”.

These are only some of my testimonials  – oral and written – which arrived to us: everything is written  in that book with  no pages to flip through. 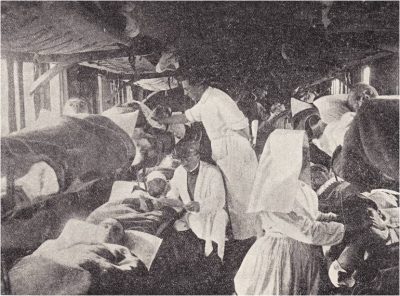 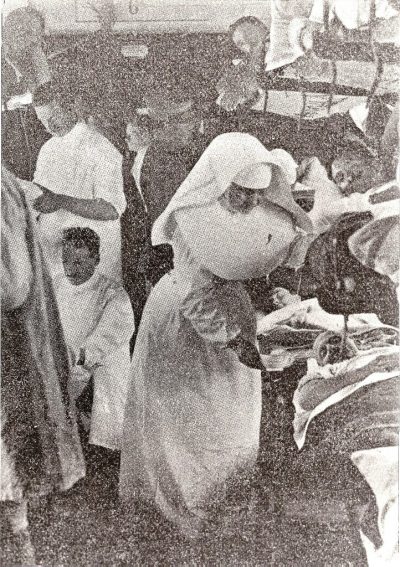